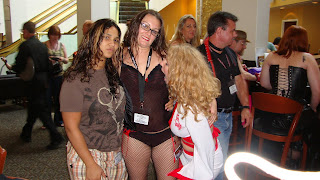 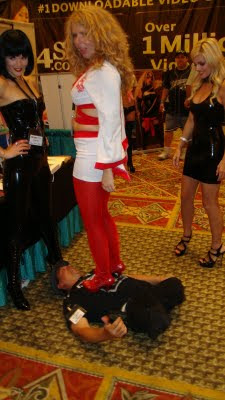 Saturday was my last day at fetishcon. Admittedly, Fetishcon was a bit of
an emotional rollercoaster for me and a total learning experience. . . .I
would say that my dual role as both a producer and a model only complicated
my schedule. . . but on this last day I still needed to film customs with
Hellena and Sin-d, not to mention shoot for my Down Jacket site. . so I was
up at 9. . which after getting to bed the night before around 4am was way
too early. . but we got both customs done in time for me to get ready for
the Superheroine Showdown. . . . . The Queen of Tights was captured by the
mental powers of a Super Villian! I was forced onto the slave auction
block, and all was presented by George Perez. . . . SO MUCh FUN!!!! My
goodness! I have video and pictures from the whole thing, so you will all
get to see it too! As I was leaving the convention hall, I finally ran into
Van, who I had been trying to see for two days!!! But, after the show down,
all I wanted was something to eat!! I had yet to have even a cup of coffee
at this point. . so I headed down to the resturant in the hotel, and found
Scott, my boyfriend, had arrived at the hotel while I was being a super
hero. .. so we grab some food,checked out the convention hall (this was the
only time I even got to see it! BOO!) and then I grabbed Devon and Sappire
to finish up shooting, but Devon got called away to do another shoot, so she
and I never did get to shoot together., . . . Sappire shot footage for my
puffy coat site. . it included bondage and spankings and lots of other fun
moments. . . and then. . I was done. . I dressed up and made everyone a
cocktail and then Scott and I headed out and grabbed some dinner, and when
we got back, we grabbed Van and went to see what trouble we coudl find. . we
ended up in Darling Rikki's room (I just love that girl!) and then Van got a
strange text with a room number. . and we went there and found Devon and
sappire whosaid they were going to go to the fetish club, but that I needed
to get changed. . so back to my room to change into my thich high vinyl
boots and shiny black vinyl body suit and opera gloves. . . and we grabbed a
shuttle down in the lobby and heaed out. .. I still have no clue where I
was. . but MAN, what a blast!!!!Something crazy going on everywhere. . .
People dressed up, and having fun and I was just so happy. . I found
trouble, drank a bunch and then scott and I grabbed a taxi back to the hotel
in the wee hours of the Am. . . then VTM and I hit the pool for a bout an
hour. . . and Rikki let me play with her beautiful breasts. . (YEAH!) And
then I headed to bed. . . .
I awoke at 10 am the next day and BOOm, we pakced up Sybil Starr Productions
back into my little non-airconditioned black honda accord and hit the road
for home. . . 1140 to go!!! It wasn't too hot out and I said to G, (aka,
Gorby, my media producer and one of my best friends I have known for 13
years) "Let's just go home." So we drove all night. . . we let Tampa
around 11:30/noon and we made it to home at 8:30 am on Monday morning. . . .
and it was so darn good to wake up in my own bed in my own house this
morning. . . . .