The City of Brotherly Love 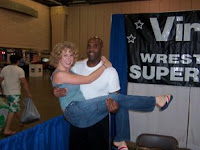 I got to go to the Wizards of the Coast Comic Book Convention that happened to be right across the street from my hotel. . a friend of mine was working the convention for this toy store http://www.timeandspacetoys.com/ so he was able to get me in and I got to meet the wrestler "Virgil" from the WWE. . he literally swept me off my feet, Virgil looks no different than when he was wrestlign on the WWE every night. .which means he is in awesome shape considering that I used to watch him on TV when I was ten years old! 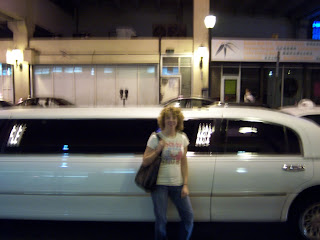 Friday night a good friend of mine, Billion, took me to Atlantic City in style!! We hopped into a white stretched limo and headed out, coors light on ice waiting in the back for us! After some great Italian food, we played craps. . and I won! Billion taught me enough to get myself in trouble. . and boy what fun! We walked the board walk and checked out other casinos. . in one of the resturants the wait staff was all dancing to "Staying Alive!"
http://www.youtube.com/watch?v=5abTfGKzeMY
I got back to my room at 3:30 in the morning, my pockest fatter and my spirits lifted. . oh and tired! 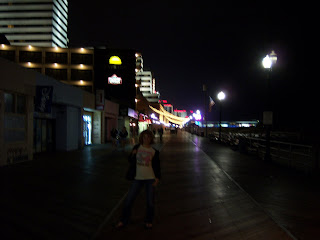 On Saturday, after some good old fashioned butt whoopings for some nice young men, I met up with a friend to go to the Phillies/Tigers game. It was the only game they lost 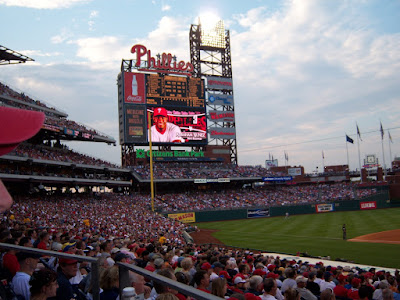 out of the series. . but I was there, Baseball Park #7, citizens Bank Park, and I had to get a philly cheese steak from Tony Luke's. . (which I did end up dribbling onto my Tigers Jersey. . it is like I am a native or something. .LOL) The Park was beautiful. . Phillie Fams were great, very passionate, and yet took the time to welcome me to their park. . there were quite a few of us Tiger fans there. . and their mascot, the Phillies Fanatic. . very funny. . here is a video clip of him giving Tigers Pitcher, Miller, the "Whammy" and then the batter hits a homerun!
http://www.youtube.com/watch?v=C3CMqilNmzY 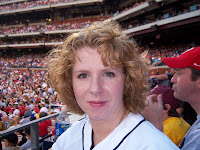 Posted by Sybilstarr at 10:17 PM No comments:

You know you are an MMA fighter. . 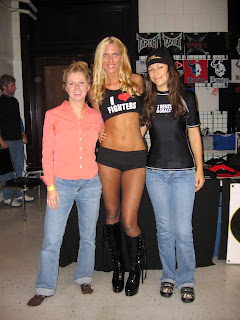 this was a great post from the fightergirls forum. . .

A spinoff of "you know your a redneck"...

There are a lot of weird little thins that distinguish you from "norml girls" and it will be fun to hear what everyone comes up with. Thought of this as I was rummaging through my purse, which leads me to

#1 You know you are a female MMA fighter when: You carry your mouthpiece in your purse "just in case" a training opportunity arises...

You have to stop wearing skirts and shorts because your legs are so bruised up you look like a crack whore...

You can no longer have long nails...

When you go to the salon to get your hair cut, you can't just get anything, you have to get something that can be pulled back in a pony tail and look good, and so your hair doesn't get in your eyes...

The only reason you care about your weight is to make sure you are able to make weight...

People ask you if you are driving your "boyfriends car" because it is covered in Tapout and other fight stickers....

You have become a makeup artist because you have had to learn how to cover up those black eyes from training for work...

You use Albolene for cutting weight instead of as a makup remover...

Your training partners absolutely don't recognize you in your street clothes and done up.... 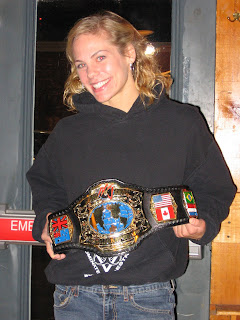 You used to wear small shirts, but now have to wear medium or large because they don't fit your shoulders and biceps...
Posted by Sybilstarr at 3:19 PM 1 comment: 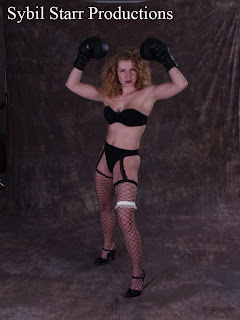 Testimonial
Driving home Saturday, I took stock: split lip, bloody nose, reddened face, sore jaw and, boy, did my midsection ache. Yes, the aftermath of another boxing match with Sybil.
This was the sixth or so time we’d fought, and it ended after 50-some minutes in a TKO. A fast punch to my nose started it bleeding, so Sybil, justifiably, declared herself the winner — of that round and of the day.
Then, to rub it in, she beat me in arm-wrestling. Twice.
This time went better for me than the previous match, though. I’d submitted, lying flat out on the mat and confessing I really didn’t think I needed any more pounding today, thank you. But Sybil insisted we finish the hour.
In that final round, she pummeled my jaw until I couldn’t stand. I fell face down to the mat. She didn’t knock me out, but it sure was close. One more punch probably would have done it.
This last time, Sybil — fast, skilled and tougher than ever — knocked me down about a half-dozen times. A few times after incredibly powerful rights to my jaw or mouth, but more of them just killer punches to my belly. (As I said, it still hurts.)
After the first knockdown, she planted her foot on my back in triumph.
I outweigh her by 60 pounds and am about six inches taller. But there’s no way I can overcome her skill and superior speed. And did I mention she’s really strong?
Though Sybil has dominated every fight, I did land a few passable punches this time — to her smiling face and to her gut. But they hardly seemed to slow her down.
The thing we both know, and for which I’m grateful: Sybil ensures our matches last the full hour, as it’s pretty clear she could finish me off whenever she chooses. Probably. Maybe.
— M, an enthusiastic fan
Posted by Sybilstarr at 10:50 AM No comments: