Way of the Warrior 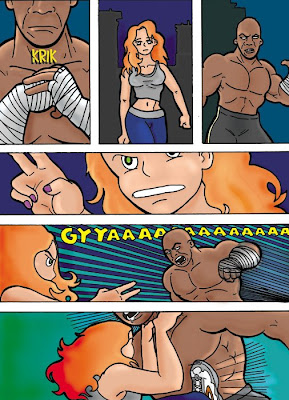 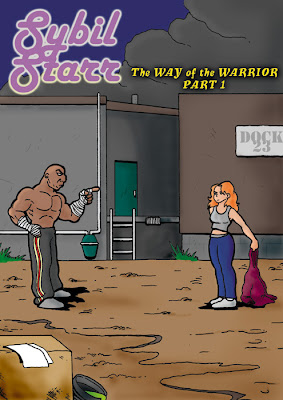 Posted by Sybilstarr at 10:43 AM No comments:

Usually, after a session with Sybil, I stop at the nearest Fed Ex Kinko's and write a review. This time, I had other pressing committments and only sent her a personal, hearfelt thank you w/o posting a review.

Today she reminded me that I owe her a review, and here it is.

First, she dominated me as completely, even though she won fewer submissions, as she did the first time she defeated me.

Second, because the experience was for me as completely fulfilling as our very first session, which I still dream about. It was not just the wrestling, which was awesome as always. It was also the care and concern she took for me personally that made it just as fulfilling as the magic of that "first time", so to speak. I'm no longer "booking a session" when I see Sybil. I have not for a long time. Rather, I am seeing my friend...who cares about me more than I deserve...and wrestling is the intense but tasty icing on the cake.

For instance, she made time in her super-busy schedule to actually train with our session in mind, not just her regular routine. I was SO touched when she told me that, because for a woman with her skill and champion heart, to respect MY meager skills (in comparison) enought to train to specifically best me just made my day...no, my month!

Thirdly, because during the session I "threw down the gauntlet" as she put it. At our first session, because she was the same size as an old girlfriend who beat me in a test of strength, I asked her to do one with me. I did the same this session...and it was the only time I did anywhere near compete with her. Even though fighting a test of strength physically hurt her, she did it for me anyway. I was so pleased and touched i almost cried, and i am man enough to admit it.

And, she spent time with me, just being my friend, and treating me like the most important person in the world...well, that last sentence had nothing to do with the review title, I just wanted to brag on her. She is also an awesome cook...the first woman who ever cooked lunch for me while wearing a bikini...I get chills just thinking about it....but I digress...

Okay, here's the detail of the fight.

We started out the session in our usual clinch, but she aggressively countered every move I attempted to put her off balance. Instead, she actually mounted me. She pushed me down, leveraging her luscious body to force me, slowly but surely, onto my back. I had expected her to evade my clinch attempt and get my back and I was totally fooled, then overpowered...with what seemed like only seconds she had me in a powerful headlock. I fought desperately to hold out against the pressure she expertly applied to a pressure point. I can often hold out long enough to force her to reapply a hold or try a new one, but the burning, screaming pain made me tap after only a short time in the hold. Sybil one, bearhugger nothing!

She toweled me off, we grabbed a sip of water, and went again. I did a little better, actually grasping her behind the neck and left bicep and slamming her to the mat. She took me best blow and almost immediately began to force her escape. She refused to let me weight dominance hold her back; within a minute or two she had completely escaped and was on the attack!

I had not done cardio workouts for two months and it showed. She used a knee to the belly attack and pulled me against the powerful and relentless pressure of her sexy knee. She then swept me to the floor and again mounted me. I tried to apply a bearhug and she grimaced for a moment, then attacked with her arms and soon had me pushed to the floor and flattened. She applied a smother (which I was hinting in messages i wanted her to do) and the intensely sensous, painful pleasure wore me down. I eventually forced my way up to my knees but she grasped me in a guillotine choke eventually...which began a chain of moves that allowed her to apply the arm bar she was secretly setting me up for. I bucked, I rolled, I fought for probably two minutes and eventually she had to reset her hold. But she never let go and never stopped her powerful pressure...she had me so dominated that she was able to playfully slap my face as if she were applying a mouth smother, then BOOM, had my arm
painfully extended. I kept fighting until she had to jerk my elbow in an "I'll break your arm" kind of painful manner until I tapped. She thanked me for tapping because (I hope) she would have continued to apply pressure and not insulted me by letting me go before tapping. The only time I want her to not pressure me up to the very limit of my endurance is when i am in a sleeper...she can break my arm but my throat is my livelihood, and she is very careful with that.

Our final fall started with her challenging me to an arm wrestling match afterward. She was, despite her protestations to the contrary, keeping track of the falls,. Since she was beating me so regularly for at least a year I had finally asked her to agree to arm wrestle me in those situations, so I can at least win something (I am still much stronger than she).

She began to apply some new moves. For the first time in a long time I was able to counter some of her more familiar moves. During this fall, I actually was able to slam her again to the floor and got in perfect side control. Unfortunately, I began to get her into a joint lock I had only seen but never used before. Just as in an earlier fall, when I refused to press an advantage i had gotten by merely using my superior weight, I asked if we could reset. I will NOT use a hold that will damage my friend...if I break her, we can't play anymore. And I never want to stop playing with Sybil. Anyway, I digress.

In this fall she then took total control. She scissored me more powerfully than she EVER has before, first my head and then my body. I immediately began to moan, then yell, then scream, and received a triumphant giggle as my reward...I LOVE it when she makes noise, teases me, and giggles when we fight. I admit it, I'm into pain...but this went WAY over the line that I could cope with...she took me right to the edge than let me go. I relaxed and she made a smart, funny comment...I began to laugh...and then she tapped my neck as if to say "BH< I'm going to choke you now, take heed" and I said "Yeah, I guess throwing my head back and laughing is not good technique, is it'. Another big giggle was my reward...this was rapidly becoming the most fun fall I ever lost!

And lose it I did. Though Sybil is lovely and sweet she is not stupid, and began to take advantage of my weakened condition. I grasped her forearm and fought like the devil, but I had given her too good an opening.

Instead of laughing and teasing she became deadly serious...she silently fought against my strong pressure on her arm...after probably ten seconds of intense, desperate struggle she expertly applied the hold I dream about most often, the sleeper. She had taken on the best fight I could give in that fall and completely overwhelmed me in it.

I longed to fight, to grasp at her arms, to either break the hold or refuse to submit until I dropped off to dreamland...BUT I promised her I would not risk damage or injury by letting my foolish ego force her to damage me. Once, I broke a rule and literally pushed her over...she rightly (and angrily) demanded at that point that i never disrespect her...so, even though my heart was screaming "Make her knock you out" my care for my friend said "Submit NOW!"

I care about Sybil too much to let me ego get in the way of our friendship. For that, she repays me with unfailingly loyalty, loving concern for my welfare, and the best battles of all those that I have ever had with women. I admire and respect her...and even though my warrior's heart HATES TO LOSE, I am proud to write this humble review for her to enjoy!

Sybil, as I told you yesterday I have found a new gym. Give me a month to improve my cardio, and please, please give me the same kind of intense battle you gave me this time the next time we meet. I look forward to being your 'bearhugger challenge' for many more sessions to come!
Posted by Sybilstarr at 6:19 AM No comments: